It is amazing how little of the world we can see with our naked eyes – how little that visible light shows us. Yet these things we can’t see affect our daily lives both positively and negatively. UV light is one of those interesting and amazing things. It can make us healthier, or make us sick. It can strengthen some materials while making others weaker. UV light can enable us to see the world in ways we could not otherwise do. Read on to find out more about this interesting form of energy and some uses for UV Light.

What is UV Light?

UV Light is the spectrum of radiation just beyond the violet color in the color spectrum. UV light is also called ‘blacklight’ for its’ ability to make materials glow without showing a lot of visible light itself.
UV Radiation was discovered by John Ritter in 1801. He conducted an experiment projecting sunlight through a prism and onto photographic (Silver Oxide) paper.
Photographic paper turns black more rapidly in blue and purple light than in red light. The photographic paper turned black in the blue and purple light as expected. However, the area beyond the purple spectrum where there was no visible light also turned black. This proved that there was energy being produced by the sun that was not in the visible light spectrum.
Here is a video that describes this discovery further

UV light has both positive and negative effects on human health, depending on how it is used and what the exposure levels are.

Some of the positive effects of UV Light include:

Protecting yourself from UV light

It has been said that there is no safe dosage of UV radiation. Given the dangers of long exposure to UV radiation, it is important to take precautions for your health. There are many easy options for absorbing or deflecting a majority of UV radiation including:

It is important to note that cloud cover does not block UV radiation. You can be over-exposed on a cloudy day without realizing it. Also, reflections from snow or water can intensify UV radiation exposure, giving a ‘skiers tan’ on half of your face, or even getting a sunburn below your jaw when on a boat or kayak.

What glows under a UV light?

Now that we understand the benefits and dangers of UV light, we can start discussing how useful UV light can be. Anything that glows under UV light is considered Fluorescent.

What Can a UV Light Be Used For 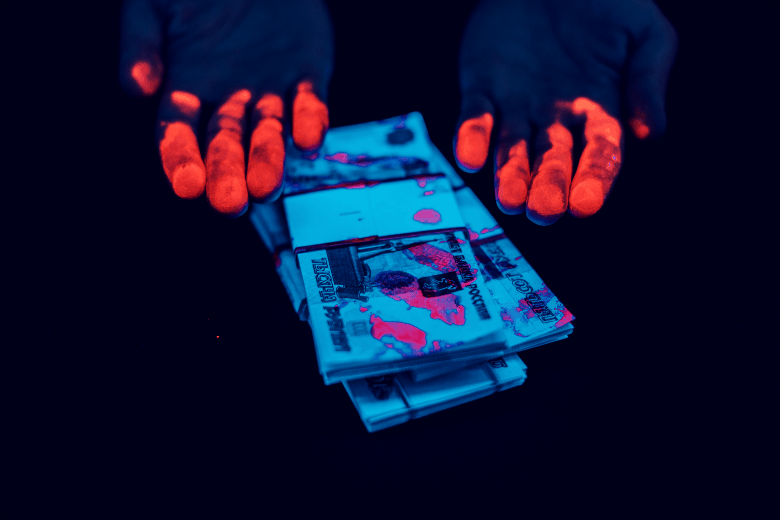 UV lights, or blacklights, can show you things that were previously just hidden from view. Have some fun and carry one around with you to open up a new world that was right in front of you the whole time. Although you may not want to bring one to your hotel room. Sometimes ignorance is bliss.
Share on email
Share on print

PrevPreviousThe Best Flashlights to Give for Any Occasion
NextLumens, Lux and Candela ExplainedNext
Menu
Menu